Nineteen-year-old Isabella Zaldaña dreams of becoming a nurse. And as a student at this city’s selective Manhattan Hunter Science High School, she was on her way.

But she often had to pinch herself to stay awake in class.

“I would nap throughout the day, instead of getting a full eight hours of sleep (at night),” Zaldaña said, describing how she had to sleep in shifts in the 300-square-foot Manhattan studio apartment she shared with her mother, father, grandmother and sister – without a door to close.

Determined to make her family – especially her mom – proud, Zaldaña pushed through, she said, earning a full scholarship to the City University of New York, or CUNY, system’s Medgar Evers College. But even as her academic star rose, her housing challenge lingered.

And as her agenda filled with college courses, she struggled, even as she thought: “I know I’m not the only one in this type of situation,” she said. “I can’t be.”

While CUNY has been hailed as an engine of social mobility, some 55% of students across 19 of its campuses recently were housing insecure: unable to pay rent or utilities, forced to move frequently, moving in with people due to financial problems or living in too-crowded housing, according to a 2019 report based on a survey the prior school year by Temple University’s Hope Center for College, Community, and Justice.

Fourteen percent – similar to nationwide estimates – were homeless, it found.

Now, the Neighborhood Coalition for Shelter, or NCS, a non-profit established by faith and community leaders in 1982, is launching an innovative pilot program to help students like Zaldaña, with the aim of easing a “serious obstacle to academic success … that cuts to the very heart of educational equity in our city and the nation,” CUNY Chancellor Félix Matos Rodríguez said.

The NCS Scholars program builds on a model established by advocates for the homeless in California, its organizers told CNN. And they hope it will be a blueprint that could be replicated throughout the CUNY system – and beyond.

Public officials and non-profits often focus on housing people with the most acute needs, such as the chronically mentally ill living on streets and subways, advocates told CNN. As a result, people like Zaldaña – dubbed the “invisible” homeless – can fall through the cracks.

“When people think ‘homeless,’ they think of people talking to themselves in a doorway. They don’t think about the guy standing next to them at the bus stop on their commute to work,” said Ann Shalof, CEO of NCS.

Colleges are often not aware of the problem, said Rashida Crutchfield, an associate professor in the School of Social Work at California State University, Long Beach.

“We have educational institutions that, until recently, really didn’t perceive homelessness as something that their students were experiencing and – even when they do – have a really hard time seeing where they fit in addressing that issue,” she said.

“So, our students fall in this middle place where the institution, if it’s not responding, and the community-based agencies don’t see our students as a part of their population, they have no place to go.”

Housing – and food – insecurity make students more likely to suffer from poor physical health and depression and more likely to drop out of college, hurting their earning potential, advocates say. And the conditions are more likely to impact students from marginalized communities, including minority students and those who are undocumented or LGBTQ+.

Zaldaña never considered dropping out, but her living conditions presented a constant hurdle – on top of dyslexia, depression and anxiety.

She needed a room of her own – one she could afford. But skyrocketing rents in the nation’s largest city made that impossible. (The average rental price in October for a studio apartment in Manhattan was more than $3,000 and only a few hundred dollars cheaper in Brooklyn and Queens, real estate firm Douglas Elliman reported.)

‘An engine of social mobility’

Meantime, the NCS Scholars program began rolling out this fall thanks to $1 million in private donations that help cover rent at a Queens apartment building for 16 Medgar Evers students, with capacity for up to 36. A social worker also is on site, and students have access to mental health resources, academic and employment support and mentoring.

The program aims to help students avoid the trauma of entering the homeless shelter system and make it more likely they will earn a degree and become independent professionals. “These students are unhoused for a range of reasons but are persisting in school,” Shalof said. “If we can provide support to help them to graduate, we expect they won’t need us anymore.”

The pilot program will cost less than $30,000 per student per year – significantly less than the average annual cost ($50,370) of housing one adult in the city’s homeless shelter system, NCS estimates.

She filled out an application, then was interviewed – and learned in late September she’d been accepted.

NCS hopes its program can be replicated across CUNY and beyond, much like the College Success Initiative created and run by the non-profit Jovenes to help the 1 in 5 Los Angeles County community college students and the 10% of California State University students in the region experiencing homelessness.

At community colleges and universities in many cities, dorms are not a given. “Even when there are dorms on campus, they’re full or very expensive,” Hubbard said. “It’s very much a situation where if there is on-campus housing, it is inaccessible to many students.”

Students facing housing insecurity often “are incredibly resilient, sleeping in their cars while going to school,” he said. “These are the types of folks we need to be helping to succeed.”

Indeed, some return to their communities after earning degrees, driven to contribute, Crutchfield said.

Claudia Blue graduated last fall from Cal State, Long Beach. The mother of two in her early 30s had been in the second semester of her first year – with no savings, no job and nowhere to go – when she separated from her husband.

She considered putting college on hold and buying a one-way ticket to Kansas to stay with her father. Then, she found Jovenes.

Case managers helped find her emergency housing, then a subsidized apartment. She now works as an on-site residential manager for the housing program while studying for her credential to become an elementary school teacher.

“Having that opportunity to go back to school and not have to quit, it’s made such a big difference in my life and my kids’ lives,” she said.

With Jovenes as a model, California lawmakers in 2019 approved $19 million to address student homelessness in the state’s three public post-secondary institutions. The law requires campuses to partner with community-based housing providers like Jovenes to provide wraparound services and rental subsidies for eligible students.

“California is ahead of the game in that the state has made the first investment of this level in addressing college student homelessness,” said Crutchfield, who is part of a research team evaluating so-called rapid rehousing programs on 10 campuses over the next three years.

CUNY’s chancellor has taken note, with high hopes for what the NCS Scholars program can do for his students – and the city.

“We have an opportunity now to reinvent the city in a way that it has an economy that’s a lot more inclusive, that lifts individuals that in the past have not had much chance to really thrive,” Matos Rodriguez said.

Zaldaña moved into her new home at the NCS Scholar’s Queens apartment building in mid-October.

“Now, I actually have a place to call my own room, and that alone, like, I’m shaking thinking about that,” she said. “I feel just immensely grateful. I just feel an overwhelming emotion.”

The best part, she said, is the library on the first floor of the building, where Zaldaña shares a three-bedroom apartment with other students who had faced housing insecurity.

She pays just $125 a month in rent from her roughly $1,000 monthly income as a restaurant hostess. Another $250 or so goes to support her family, and with access to free or reduced-price food at school and help paying for public transportation, she now can save about $300 a month.

Now more able to focus on her career goal of nursing, Zaldaña is glad she sought out help, she said, and hopes other students will, too. 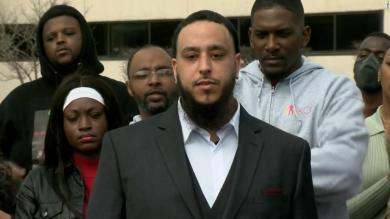 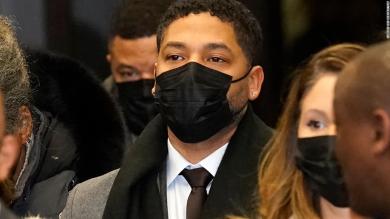 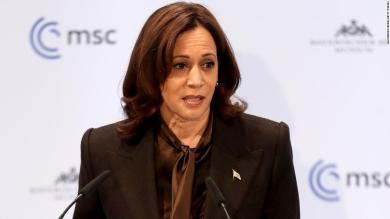 Vice President Harris is expected to travel to Poland