When Kayden Maclay woke one November day last year, he and his team-mates faced a decision.

In a few hours’ time, they were scheduled to take to the ice. They had travelled from across the United States, Canada and beyond to come together in Wisconsin and play in a hockey tournament.

But, overnight, while they slept, the context around the event had changed. A thousand miles away, in Colorado Springs, a familiar American story had played out.

A lone shooter. An automatic weapon. Hundreds of bullets. More members of their community dead.

The shooting, at Club Q, was a reminder for Maclay and his team-mates as to why they take the precautions they do – precautions few other teams would even consider.

“We basically don’t announce where we are doing anything publicly,” Maclay tells BBC Sport.

“We can’t release the specific ice rink until the last minute. All this violence is planned in advance, so we have to adapt.”

Maclay plays for Team Trans, an all-transgender ice hockey club. The tournament they were in Wisconsin to play was timed to mark Transgender Day of Remembrance (TDOR).

Earlier that week, advocacy organisation Human Rights Campaign had reported that 32 trans and non-binary people had been killed in the United States in 2022.

The previous night’s shooting at Club Q added to the tally, with five people, two of them transgender, shot dead.

“Club Q was one of those things that really upped the importance of the TDOR moment,” Maclay adds.

“Our media guy had to rewrite the script we gave to announcers.

“We have no plan to stop this. You do run the risk of danger. How do you keep your people safe?”

Maclay and his team decided to play on. They played on to remember lives lost the previous night, but also to celebrate those who live on.

The tournament in Wisconsin, like most of Team Trans’ matches, was a private affair.

Since they were founded in 2019, Team Trans have primarily played internal draft tournaments with mixed teams of trans men and women playing alongside each other.

Players are graded on their hockey ability to make for even matches and to ensure all those who want to play can, without being drawn into the heated debate over whether transgender athletes can safely and fairly participate in mainstream sport given the physical differences conferred by male puberty.

For non-binary player Andi Vertz, who uses ‘they’ and ‘them’ pronouns, the risk of the team being siloed away from conventional leagues and opposition is less important than providing a space for people to play ice hockey, while being themselves too.

The TDOR tournament was the first with Team Trans for Vertz, 31, after they moved to Chicago, away from their previous queer team.

Having started playing hockey at 18, the sport has been a key crutch for them through coming out in 2016.

Vertz says: “It is really important having that space, being able to control competitiveness, not just being there to score most goals.

“A regular, straight hockey tournament? I’d see no enjoyment in that. I like that this is separate, and a good community.”

Danielle McLean, whose first memories are stepping on the ice and learning to skate aged four where she grew up near Boston, agrees on how important sport has been for her well-being.

She started transitioning aged 23 in 2010, before joining a women’s hockey team four years later. Now 35, she continues to play in Washington DC and has written about her experience of switching to women’s sport, a move she describes as “seamless”.

“I have a supportive outlet and a great group of friends. I met my partner of three years through ice hockey,” she says.

“Being able to play women’s hockey has been game-changing. Transitioning would be so much harder without it.”

McLean, a senior business journalist, was asked if she wanted to join Team Trans and having spotted the club on social media, she played for them for the first time in Wisconsin last November.

Even having played hockey her whole life, she knew it was a team like no other.

“I remember stepping into the locker room for first time, and having the conversations that trans people have and sharing that with a locker room – I had goosebumps,” she says.

“It was a surreal and special moment. I’ll remember it for the rest of my life.”

‘I am used to cruelty’

The locker room is often a serious obstacle for transgender people, and Team Trans can provide a way back into sport for those who feel forced out – sometimes through traumatic events.

Andrea Sand was 10 when her family moved from Houston, Texas to Minnesota. She was soon sent to hockey camp to play the state’s primary pastime, despite minimal experience.

“It was my first experience of hazing,” she tells BBC Sport as she recalls brutal initiation rituals. “There was locker boxing; preparing for the ice by beating each other up. I had to run around the rink in my underwear in winter.

“I stopped playing hockey for 22 years. Team Trans gave me another way in.”

Now 36, Andrea joined Team Trans for the first time at the Pride Skate event in Minneapolis last July, determined not to let the bullies and abusers of her past win.

“I actually did enjoy hockey – skating is a great workout and really fun. You feel like you’re flying. If you stop doing things because you’re bullied, you wouldn’t do anything, especially if you’re trans.

“I didn’t like being chased off the ice. The idea of showing up and everyone on my team being just like me, that was great.”

Being part of a solely trans team was the big selling point for Andrea, whose views on the way people like her are treated in wider society are uncompromising.

“I get anxious around non-trans people; I am used to cruelty,” she says.

“We host our own tournament and get toldwe are political. We make our own teams and they still hate us.”

‘They’re trying to paint us as rivals’

While the club plays internal tournaments and against other teams which are supportive, matches still feature the inherent risks associated with one of the most physical sports on earth.

After a collision with an opponent during one game at the TDOR tournament, a player needed hospital treatment.

Footage from the incident circulated on social media and resulted in negative media attention.

Team Trans responded by explaining the grading system they use to make up teams, clarifying that the injured player had recovered and emphasising the supportive environment the club provides.

Danny Mack, the injured player, wrote on social media that his injury was the result of “a very odd fall into the boards”, that he had “had an amazing time” and would “do it all over again”.

“They’re trying to paint us as rivals, but you can hear the calls for medics [in the footage],” says Sand.

“It was accidental contact; there was no malice. We’re all friends on this team. It was an internal draft. We all paid to be there out of our own pocket.

“I removed the guy’s skates for him, which led to reports stating the impact knocked his skates off.

“It ended 7-1, which I’m ashamed of; I wanted the game called off after the injury.”

Maclay, however, defends the decision to play on. Concussion is a relatively common injury in ice hockey – occurring around once every 20 games in the National Hockey League (NHL).

Team Trans were playing for more than themselves as well.

“We had to decide whether it was worth continuing to play, whether to cancel the tournament,” he says.

“We decided to play as what we were doing this weekend was important. That was at the beginning of the second period – then between the second and third period, every player came on the ice to mark Transgender Day of Remembrance.

“We had a long moment of silence, then a huge group hug. We had people all over the world in this big family.”

Maclay was born in Wisconsin, where he joined his first hockey team. After transitioning aged 18 – “my dad was on board right away, we refer to my mum as ‘most improved player'” – he plays for queer team Pittsburgh Tigers as well as serving as treasurer for Team Trans.

“Team Trans saved my life,” the 26-year-old sales engineer says bluntly. “It’s a sentiment a lot of us echo.

“Now my life is work, hockey, family and friends. Hockey has given my life meaning.”

Team Trans relies on donations to allow the club to travel all over the country for tournaments, which includes support from the top-level NHL.

Along with cash, the NHL has also backed the team with unequivocal statements of support on social media.

“Never in a million years did we expect this,” says Maclay. “No wishy-washiness – the NHL could not have been more crystal clear.

“We see a lot of organisations which are supportive, but less explicit, leaving wiggle room to get out of it.

“The NHL was very clear, and that’s one of the most important supportive things I’ve seen happen for the trans community, especially given the toxicity.”

“It is game changing,” says McLean, who feels that NHL’s leadership can help change minds in the wider hockey community.

“I grew up watching Boston Bruins, cheered for all of these players growing up. The NHL is the face of hockey.

“Knowing we have support at the highest levels, and our love is embraced by a broader hockey community, is everything.

“What trans people want is to live our lives and be accepted by society. To not feel like an outsider is huge.”

‘I have never cried that much at a hockey game’

By contrast, the attack at Club Q has spread fear and isolation through the transgender community in the United States.

“I could picture myself being at bars similar to the one in Colorado,” Vertz says. “It was very strange and frightening as it could easily have been here.”

On the day after, on the ice and in the huddle, Team Trans was even more important.

“It’s not something you realise until you’re in that space – everyone standing together being trans and non-binary – you don’t realise you’re missing that feeling until it happens.

“It’s amazing to recognise that space.

“I have never cried that much at a hockey game in my life.” 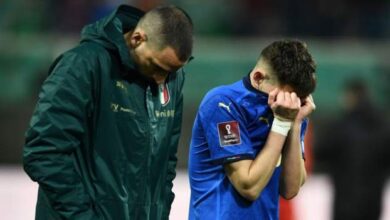 Italy out of World Cup: Can Azzurri turn ‘disaster’ against North Macedonia into better future? 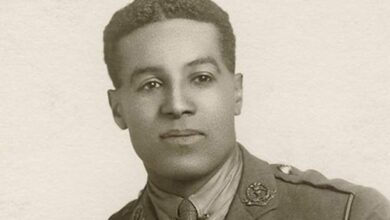