Here are the key takeaways from the panel’s second hearing this month about Trump’s efforts to overturn the 2020 election and the violence in the Capitol on January 6.

The committee surprised many observers Sunday when it announced that Trump campaign manager Bill Stepien would be testifying in-person at Monday’s hearing. But Stepien had a surprise of his own on Monday morning, when he found out that his wife went into labor, so he pulled out of the hearing.

This whirlwind of events forced the committee to scramble — and they handled it deftly, albeit after a 45-minute delay.

Lawmakers and committee staff were obviously prepared with video clips from Stepien’s private deposition. And they played a lot of footage from his testimony Monday, which revealed new details about his conversations with Trump and how he advised the President not to prematurely declare victory on election night.

In some ways, the outcome gave the Democratic-run committee more power to control what the public heard from Stepien. He wasn’t in the room to say his piece, which could have included some defenses of Trump and some pushback against the committee. Instead, the panel could pick and choose which deposition clips it played, and they focused like a laser on the most damaging material for Trump.

Stepien’s testimony wasn’t the committee’s only use of depositions on Monday. The panel played lengthy portions of former Attorney General William Barr’s deposition with the committee, where he described in detail why Trump’s fraud claims were “bogus” and why he has seen nothing since to convince him there was fraud.

The committee did not invite Barr to testify publicly for Monday’s hearing, but the minutes of his deposition that played made it feel at times as though he was there.

The video depositions have also given the committee the chance to show testimony from others in Trump’s inner circle — including Trump’s daughter Ivanka Trump and son-in-law Jared Kushner — without having to bring them in to testify. And by just showing video depositions, the committee controls which soundbites are aired.

The hearing is illustrating they key role played by Barr in setting the tone for “Team Normal,” the group of campaign and White House officials who were trying to advise Trump the fraud claims were bogus.

It’s not for a lack of trying to find fraud. Barr had issued a controversial memo weeks earlier that allows prosecutors to look at election crime claims even before certification of the vote. Barr’s move had prompted a top public integrity official at the Justice Department to resign. Barr looked for fraud and didn’t find it.

Democrats reviled Barr when he was in office — accusing him of wielding the powers of the Justice Department to do Trump’s bidding, undermining the Russia investigation, and pushing right-wing conspiracy theories. But over the last two weeks, Barr has become a new hero of sorts for liberals, for aggressively debunking and condemning Trump’s lies about the 2020 election.

The Democratic-run committee has featured clips from Barr’s deposition more than any other witness so far, and they interviewed more than 1,000 people as part of their yearlong investigation. These clips have established Barr as the highest-ranking Trump administration official to affirm the legitimacy of the election results and disavow Trump’s relentless effort to claim that the election was tainted by fraud.

During Monday’s hearing, Barr dismantled specific Trump-backed claims about illegal “vote dumps” in Detroit, nationwide vote-rigging by Dominion with its election machines, and other conspiracy theories.

Unprompted, Barr even went out of his way to criticize “2,000 Mules,” the film created by right-wing activist Dinesh D’Souza, a convicted felon who claims that the 2020 election was stolen. (In a deposition clip played Monday, Barr laughed off the film and said it was “completely lacking” in evidence.)

Barr said the theories Trump supported were “idiotic” and “amateurish” and “detached from reality.” This rhetoric is strikingly close to what top Democrats have said all along about Trump’s fraud claims.

To be clear, Barr is still a hardline conservative. Just a few weeks ago, he made several false claims in a Fox News interview about the Trump-Russia investigation, and backed up Trump’s baseless assertions that the entire probe was a fabricated “hoax” perpetrated by Democratic operatives and the FBI.

One of the primary areas of focus of Monday’s hearing was to underscore the idea that Trump and some of his allies continued to peddle false claims of election fraud after they were personally told those claims were not legitimate.

The committee made the argument that Trump was repeatedly told by his own top officials, including Barr and Stepien, that the myriad of fraud claims he was pushing were groundless and were certainly not evidence that the election was stolen.

“I specifically raised the Dominion voting machines, which I found to be among the most disturbing allegations — disturbing in the sense that I saw absolutely zero basis for the allegations, but they were made in such a sensational way that they obviously were influencing a lot of people, members of the public,” Barr said during his deposition, according to a video played Monday.

Yet, Trump and some of his allies continued to push these false claims all the way through January in what the committee attempted to show was a bad faith effort to overturn the election despite consistently being told those claims were not valid.

During their December 2020 Oval Office confrontation, Barr said that Trump gave him a report that claimed “absolute proof” the Dominion voting machines had been rigged. Barr said that the report “looked very amateurish to me,” and he “didn’t see any supporting information” for the fraud claims.

Barr would resign in December 2020 shortly after his last meeting with Trump and was replaced by acting Attorney General Jeffrey Rosen, who also faced a similar barrage of pressure from the former President to investigate the same unfounded election fraud claims that Barr had warned him were baseless.

Ultimately, Trump considered replacing Rosen with a relatively obscure environmental lawyer, Jeffrey Clark, who had demonstrated a willingness to pursue the fraud claims that other senior DOJ officials would not.

Clark drafted a “Proof of Concept memo” for overturning the 2020 election and sent it to top Justice Department officials on December 28, 2020, two weeks after Barr’s resignation. That memo relied heavily on many of the same debunked fraud claims that Trump had already been told had no merit.

At the same time, Trump’s allies were pushing the Justice Department to take Trump’s false stolen election claims to the Supreme Court in an effort to prevent the outcome from several key swing states from being counted. The brief sent to Rosen and other top DOJ officials by Trump’s personal assistant at the White House cited the same report on Michigan voting machine irregularities Barr had told Trump was “amateurish” and failed to include any supporting information.

The committee focused on testimony Monday that distinguished between two groups advising Trump in the days after the election: “Team Normal” and those who were with Rudy Giuliani pushing baseless claims of voter fraud.

“We called them kind of my team and Rudy’s team,” Stepien said in deposition video played by the committee. “I didn’t mind being characterized as being part of Team Normal.”

The committee traced back the divide to election night, when Stepien and others were telling Trump it was too early to call the race, while Giuliani told him to declare victory.

“The President disagreed with that. I don’t recall the particular words. He thought I was wrong. He told me so,” Stepien said of a conversation with Trump on election night. “And that he was going to go in a different direction.”

The committee worked to undercut the wild claims Giuliani and Sidney Powell were making about votes being changed and foreign countries being involved — all of which were untrue. They showed video from depositions Giuliani and Powell juxtaposed with officials like Barr and Stepien saying the claims were simply nonsense.

The committee even took a dig at Giuliani and his state of mind on Election Night, playing video from Trump campaign spokesman Jason Miller’s deposition where he said that Giuliani “had too much to drink.”

“I mean, the mayor was definitely intoxicated,” Miller said. “But I did not know his level of toxic intoxication when he spoke with the President, for example.”

One of the key details the January 6 committee revealed during Monday’s hearing was how Trump’s lies about the election turned into millions of dollars in fundraising for Trump’s campaign and the political action committee he created after the election.

The panel made the case that Trump’s false claims about voter fraud dovetailed with his campaign’s fundraising effort — resulting in $250 million being donated to Trump and his allies, including solicited requests for an “official election defense fund,” that did not exist.

During the committee’s investigation, went to court to try to pry loose financial documents like bank records that were connected to January 6. Monday’s hearing was the first indication of how the panel plans to use those records in its hearings.

Still, the committee didn’t show a ton of detail about what financial documents it had obtained, and more could be unveiled in the hearings to come.

Committee connects fraud to the violence

After a two-hour hearing focused on debunking Trump’s lies about the election, the committee ended its second hearing by returning to the violence that occurred at the Capitol on January 6.

Committee Chairman Bennie Thompson introduced a video showing that those who went to Washington on January 6 and breached the Capitol did so believing the election lies.

“We know they were there because of Donald Trump. Now we hear some of the things they believed,” Thompson, a Democrat from Mississippi, said.

In the video, Trump’s supporters said they believed that the baseless claims about Dominion software and about how Trump’s votes were not counted.

“I voted early, it went well except for you can’t really trust the software, Dominion software all over,” one person said.

The return to the violence at the Capitol is a theme that’s likely to continue through the opening series of hearings detailing how Trump tried to overturn his election loss in the lead-up to January 6, including hearings planned for this week about Trump’s pressure campaign against the Justice Department and his Vice President Mike Pence.

Attorney General Merrick Garland said on Monday he plans to watch all of the hearings of the committee — and that the prosecutors handling criminal cases stemming from the January 6 insurrection are watching, too. Garland has faced mounting pressure from Democrats to pursue a criminal case against Trump and his allies related to January 6.

This story has been updated with additional developments Monday. 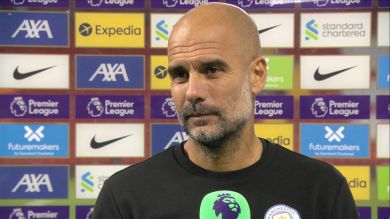 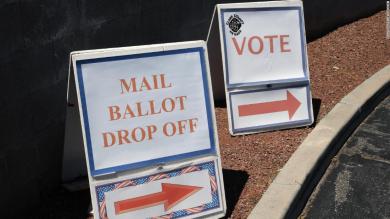 Another voter fraud accusation blows up in Republicans’ faces 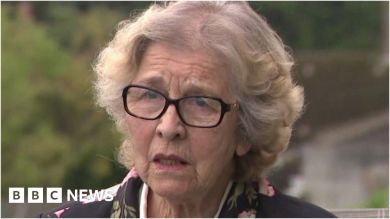 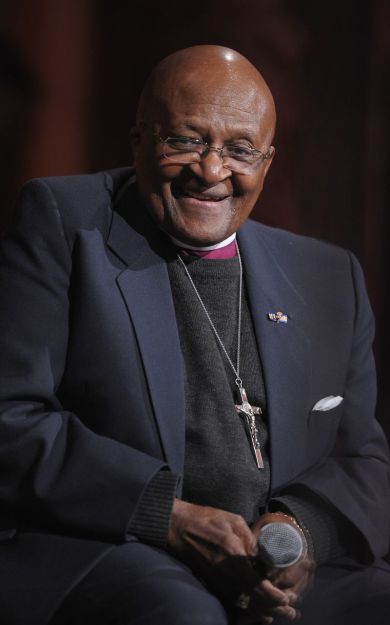