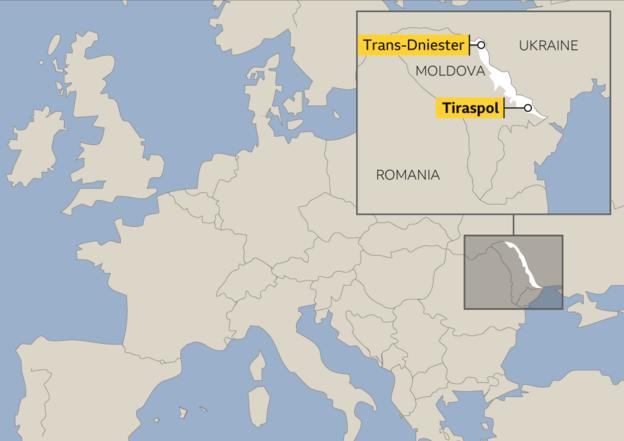 This is an updated version of an article originally published in May 2019.

We’re driving down Andriy Smolensky’s favourite street. It’s the only one in Tiraspol that doesn’t cause his Land Rover to bounce and rattle over potholes and broken concrete.

“They’ve used a new technology to make it like this,” he says, almost proudly. “I could drive up and down it all day.”

The tiny de facto republic of Trans-Dniester – sometimes known as Transnistria – is a place frozen in time.

In its capital Tiraspol, the hammer and sickle motif of the former USSR is proudly displayed on billboards and government buildings. A huge statue of Lenin looks on from a plinth outside parliament, a mark of the pride and nostalgia the city feels for its Soviet past.

But on Wednesday night, it will take a giant stride towards its future. The city’s football club, FC Sheriff Tiraspol, qualified for the Champions League group stage for the very first time with a play-off victory against Dinamo Zagreb in August. Their reward is a draw that will see them welcome Real Madrid and Inter Milan to Tiraspol, after Wednesday’s curtain-raiser against Shakhtar Donetsk.

If it marks new ground for Sheriff, then elite European football will be stepping into the unknown, too. It is the first time the Champions League will have been played in one of Europe’s ‘unrecognised’ de facto republics.

In international law, Trans-Dniester, a thin sliver of land on the border with Ukraine, belongs to the Republic of Moldova, a country formed in 1991 as the Soviet Union was collapsing.

In 1992, Russian-backed forces fought a separatist war here. When it was over, close to a thousand people had been killed, and the land east of Moldova’s Dniester river had seceded to form a self-declared new state that remains unrecognised by the international community.

Trans-Dniester takes its ‘independence’ from Moldova seriously. It uses its own currency, the Trans-Dniestrian rouble, which cannot be obtained or exchanged anywhere else in the world, and which sits outside the international banking system. In Tiraspol, phone signals from Moldova don’t register, despite the ‘border’ being only 20km away.

The territory has a reputation for corruption, organised crime and smuggling. American foreign policy think-tank the Carnegie Endowment for International Peace described it as “a haven for smugglers”.

Millions of dollars of contraband are believed to have been moved across its border with Ukraine in recent years. Yet in Tiraspol, buildings are crumbling and the roads are cracked. The capital is a picture painted in Soviet grey.

Smolensky used to work here as a broadcaster, transmitting Russian-funded German-language programmes to Europe and the United States that “spread the message” of what Trans-Dniester is trying to achieve.

Before that, he was employed by the territory’s biggest private firm, the Sheriff Company. He worked on immigration papers for overseas signings at the company’s football club, FC Sheriff Tiraspol.

The Champions League debutants have played in Moldova’s football league since 1999. They are kings ruling over a peasant land. The Sheriff Company annual turnover is almost double the state budget, and it funds the club directly from its vast wealth reserves. The rest of Moldovan football is impoverished by comparison.

While the rest of the top division play on sports pitches rented from municipal authorities, Sheriff’s home is a specially constructed $200m (£154m) arena on the outskirts of Tiraspol. They have won 20 of the 22 league titles they have contested.

The name Sheriff is synonymous with power in Trans-Dniester. The Sheriff Company was founded in 1993, ostensibly as a charity with the aim of providing financial assistance to veterans of the local state police in the immediate post-Soviet era.

Today, it dominates everything from food retail to banking, from the media to politics. While nominally a private business concern, in December 2020 it won an overwhelming majority in the local parliament through its political party, Obnovlenie – Renewal.

There is no formal connection between the Trans-Dniestrian government and FC Sheriff, but its position of political and economic strength is steadfastly secure.

But the football club haven’t always had things their own way. Petr Lulenov is a member of the Trans-Dniestrian Football Federation. He says that, before victory in this season’s Champions League qualifiers, Sheriff’s blueprint for European success had been failing for years.

“It was the business model of the club to sign foreign players from South America and from Africa, add to their value and then sell them to Russian clubs,” says Lulenov.

But owing to the weakness of the domestic league and the subsequent lack of competition, the model wasn’t sufficient for raising players’ standards.

“It was also hoped that teams from Russia and Ukraine would come and use the club’s facilities and that that would help create big football rivalries,” says Lulenov. “But it isn’t the way it’s turned out. The football club is run at a massive loss.”

Instead of transfer fees, the current squad have shown their value for Sheriff on the pitch. Of the XI that started their Champions League play-off first-leg win against Dinamo, 10 had been signed since the end of the club’s previous European campaign 12 months earlier.

Sheriff have rarely relied much on local talent, but a recent relaxation in the Football Federation of Moldova’s regulations regarding homegrown quotas has freed the club up to pack out their squad with signings from abroad. In 2019, the club had 11 Moldovan passport-holders on their books; this season, it’s just six. Two of them are backup goalkeepers, while another two are fringe players fresh out of the club’s academy.

Instead, the team is a patchwork of nationalities and cultures. The Champions League squad features players from Malawi, Trinidad & Tobago, Uzbekistan, Ghana, Brazil, Luxembourg and Peru. Taken in the context of Trans-Dniester’s unusual political status, there is little sense in which Sheriff truly represent Moldova.

Speaking to ordinary people on either side of the Dniester river, the view seems to be that the partition of the country serves nobody but the political elite.

That is a position echoed by authorities in Ukraine. Yulia Marushevska, head of the Odessa regional customs division, said in 2016: “[The situation] is suitable for contrabandists, and for high-ranking officials in Chisinau and Kiev.

Since the crisis in Ukraine that began in 2014, there has been a tightening of border controls. In July 2017, a customs post, jointly operated by Ukrainian and Moldovan authorities, was set up at the border village of Pervomaisc-Kuchurgan.

The European Observatory on Illicit Trade (Eurobsit) estimates that 70% of the illegal trade passing through Trans-Dniester had previously entered and exited at this crossing, on its way to and from the Ukrainian city of Odessa.

Meanwhile, a 2014 free-trade agreement between Moldova and the European Union included Trans-Dniestrian businesses in its scope, and exports have since swung dramatically away from Russia and towards Moldova and the West.

It seems despite 29 years of deadlock, there are signs of greater co-operation.

“This conflict is not totally frozen, rather it is a conflict of frozen solutions,” says Octavian Ticu, a historian and former minister in the Moldovan government.

“Moldovans have interests with Trans-Dniestrians, they deal well together in business.”

Outside of the capital, football does what it can to soothe the horrors of the past.

In the town of Bendery, just a few kilometres inside the Moldovan border but under Trans-Dniestrian control, a military roadblock manned by khaki-clad soldiers beckons cars to a crawl as they flow in and out of town.

A mounted tank points its barrel triumphantly at the overcast sky. Along one side Cyrillic lettering bears a call to arms: За родину! – For the homeland!

Situated on the banks of the Dniester, this is a city of the crossfire.

Alexandru Guzun was due to play for Bendery club FC Tighina against FC Constuctorul the day a simmering conflict broke out into war. The date was 2 March 1992.

“Can you imagine the shock of arriving in a city you know well and seeing bombs exploding in the streets?” he says.

Guzun was due to meet with his team-mates at a hotel before travelling together to the club’s Dynamo Stadium home ground. That isn’t the way it worked out.

“The hotel was right on the river. Because of where it is located, with Tiraspol only a few kilometres one way and the Moldovan soldiers coming from the other, we were physically in the middle of the fighting.”

Once inside the hotel, it quickly became clear that there was no way out. With bombs and shells exploding around them, Guzun and his team-mates took the only route open to them – downwards.

“We took everything we could down to the basement. Everything we needed to live. We would take it in turns to go up to the first-floor hotel restaurant to get supplies and take them back down for everyone. We were trapped there for three days,” he said.

“On the second day of the siege, some pacifists who were on neither the Moldovan nor the Trans-Dniestrian side, came to the hotel. They erected a white flag from the top floor. These guys lived underground with us.

“We found out since that an agreement was reached between the two parties for a ceasefire to allow people inside the hotel to escape. I don’t believe that could have happened without the guys who came with the white flag.

“But we still had to make it from the hotel over the bridge. Just because a ceasefire has been agreed, it doesn’t mean no-one will shoot at you. Nobody would have investigated. The bridge was full of bullet holes.”

Guzun left FC Tighina at the end of that season to move to Ukraine. Most of his team-mates followed. It took years for the city to recover from the distress suffered in the first half of 1992. A ceasefire in July that year brought the conflict to an end.

Back in Tiraspol, FC Sheriff’s power is so entrenched they are unlikely to be surpassed by their impoverished rivals in the Moldovan league any time soon.

Last season’s Divizia Nationala title was wrapped up with 32 wins from the 36 games and just a single defeat, as the team romped home by a 16-point margin.

A stale, uninteresting dominance prevails in the league. The hope now is that the Champions League and the visits of Real and Inter will inject some much-needed excitement into the predictable spectacle of Sheriff’s annual title processions.

“The football club will never collapse,” says Lulenov. With a TV-rights windfall from Uefa pending and the on-going backing of the Sheriff behemoth, he is probably right. But still the roads in Tiraspol are cracked.

“Peace and prosperity, that’s all we want,” says Smolensky, swerving to avoid another gaping hole in the ground.

“When you have that, everything else takes care of itself.” 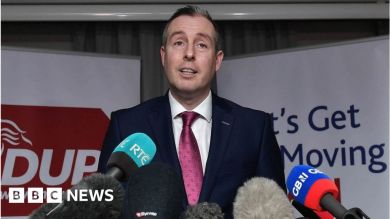 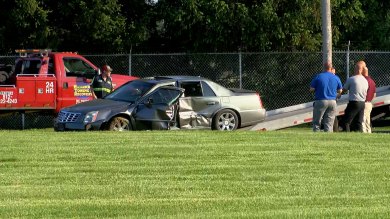 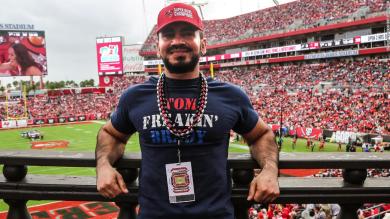 Two veterans, one decade, Tom Brady, and a congressman: An unlikely Afghan escape leads to reunion at the playoffs 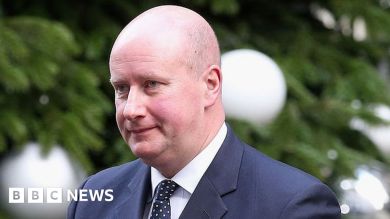 Lord Geidt quits: No 10 to publish resignation letter to PM