Groups opposed to vaccination have sought to stoke the fears of parents and children by falsely claiming that the vaccines are untested and dangerous.

Last week, a small group of protesters demonstrated outside St. Thomas More Catholic School in the town of Blaydon, near Newcastle in northeastern England, as children entered the school gates.

In a letter posted on the school website, headteacher Jonathan Parkinson said several students had been “deeply upset by the way they were treated and the images they were shown” and that the police had been informed of the school’s concerns.

“We would like to reiterate that the school’s role in this is to host the vaccination team; we have not expressed a view on whether or not children should be vaccinated as this is a decision to be made by families,” he said. “Our priority remains the wellbeing of our students and we are doing our best to support those that are upset.”

David Phillips, headteacher at Chilwell School in Beeston, Nottinghamshire, in central England, told the PA news agency last month that he had contacted the police after his school received “abusive and threatening messages” from anti-vaccination campaigners.

Pupils have been handed leaflets with disinformation and posters have been put up accusing the school of “treating children like experimental animals,” PA reported.

Vaccinations were opened up across the UK to healthy children aged 12 to 15 late last month, with each to be offered a single dose of the Pfizer/BioNtech vaccine. Many will be offered the shot through a vaccination program in their school, with takeup voluntary.

Parental consent will be sought but some older children may be able to be vaccinated against their parents’ wishes if they are considered mature enough to give informed consent, the government said.

Anti-vax group Outreach Worldwide has posted calls on Instagram for supporters to promote its “informed consent campaign” outside named schools at specified times. It’s unclear how many people have responded.

One more general post on its Instagram page says: “Stand for the children. On the day of the injection roll out at your local school peacefully disrupt.” Others show photos of placards with messages including “Mums against jabbing children” and “These vaccines are harming our teens.”

A mobile phone video posted to the page shows an activist approaching children in school uniform, asking them if they have been vaccinated and offering them leaflets, and telling a woman that “jabs aren’t for pregnant women.” The UK government says pregnant women should be vaccinated against Covid-19 to protect against potentially serious illness later in pregnancy, as do US health officials, who strongly recommend it for the safety of both mother and baby.

Another campaign group, named Lawyers for Liberty, has posted on Twitter that it will “send a legal letter” anonymously on parents’ behalf to their child’s school if it is promoting the Covid-19 vaccination program, warning the headteacher in question of the “legal risks of this policy & responsibilities of the school.”

“The level of intimidation of schools and teachers is abhorrent,” he said. “I make it absolutely clear to any headteacher or teacher who is watching this that, contrary to some of the things they have been told, legal liability rests not with schools, but with the health service and those providing vaccinations.”

Coronavirus infection rates remain high in the UK, with 40,701 positive tests reported on Thursday, although a successful vaccine rollout means the rate of hospitalizations and deaths with Covid-19 is significantly lower than at their peak.

The latest figures from the Office for National Statistics show a sharp rise in positive Covid-19 tests in children in school years 7 to 11, that is, age 11 to 16, since schools went back in early September.

Union leaders have warned of the disruption to education posed by continued Covid-19-related absences.

“We are hearing from schools where there are 10 percent or more of pupils absent and where staff are also off work because of the virus,” Geoff Barton, general secretary of the Association of School and College Leaders, said in a statement Tuesday. “Teaching and learning is very difficult in these circumstances and it is clear that the educational disruption of the past 18 months is far from being over.”

The figures emphasize the importance of the vaccination program for 12- to 15-year-olds, Barton said. “The anti-vaccination campaign that is taking place is extremely unhelpful and we urge parents and students who have any concerns as a result of this campaign to seek out reliable and official sources of information.”

UK Education Secretary Nadhim Zahawi warned Thursday that children could be required to wear masks again in the classroom if the Covid-19 situation worsens significantly.

“Attendance has gone up, the last set of figures I looked at was about 90%, that obviously will fluctuate depending on infection rates. But my priority is to protect education, keep those schools open,” Zahawi told Sky News. The government’s plan “contains lots of contingencies, including masks,” he added.

Announcing the decision last month to extend vaccinations to children aged 12 to 15, the government said it was hoped the measure would protect children from catching Covid-19, reduce transmission in schools and limit disruption to their education.

Chief Medical Officer for England Chris Whitty stressed the rollout was an “offer” rather than a requirement, and said the assessed benefits and risks of vaccination for 12- to 15-year-olds must be communicated “fairly and properly” to both children and parents.

“Children, young people and their parents must be supported on the decisions they make, with no stigmatization of people either for accepting or not accepting vaccination. This is really critical,” he said.

Vaccine disinformation efforts targeting children and their parents are not isolated to the UK.

There were angry scenes in Beverley Hills last week, when anti-vaccine mandate protesters confronted parents and children at a “walk your kid to school” event.

At the end of August, two posters associating Covid-19 vaccination with collaboration during World War II were discovered pasted to a historical information panel near a school in the town of Crocq, in the Creuse department of central France.

“We must not let our children die. Yesterday heroes, today collaborators. You put our children in the hands of the Fourth Reich,” the text said, according to French public radio station France Bleu.

Jean-Luc Pierron, mayor of Crocq, told CNN that an investigation into who put up the posters was underway.

“I just felt that I was dealing with very cowardly people, to have put up those posters, that’s all,” he said of the incident.

In the town of Forli, in northern Italy, anti-vax activists who spray-painted graffiti outside local schools in recent days also drew a link between measures brought in to limit the spread of Covid-19 and Nazism.

Photographs posted on the Facebook page of the local branch of the center-left Democratic Party on October 1 reveal the graffiti as saying: “Vax kill. Save the children. No masks they are harmful” and “No vax. No nazipass.”

The latter is a reference to the “Green Pass” introduced in Italy, which makes it mandatory for all public and private sector workers to show proof of vaccination, a negative test or recent recovery from infection. The pass is also needed in order to eat out or visit entertainment venues, sports venues and cultural sites.

“These episodes are showing more and more how the opposition to vaccines is taking shape as a real anarchist current, increasingly dedicated to violence and illegality,” the Democratic Party branch said in a post accompanying the images.

“What is more serious is that these decidedly violent writings were made in front of the schools, attended by those children that are too often exploited in the ‘no vax’ protests.”

The party described the action as “shameful” because it upsets those “we should protect most, children and young people, trying to generate fear and insecurity in families.”

Local Democratic Party leader Daniele Valbonesi posted on Facebook the following day that the party’s initial post had been “subjected to a massive and indiscriminate bombardment by social profiles attributable to the ‘no vax’ galaxy,” adding that “more than 1,300 messages have been blocked.”

“Once again, we reject the unacceptable association that the ‘no vax’ (activists) create between themselves and the victims of Nazi-fascism,” he said. “These people continue to demonstrate that they have no knowledge of either history or the meaning of freedom.” 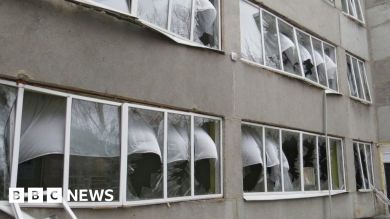 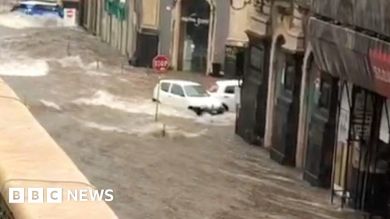 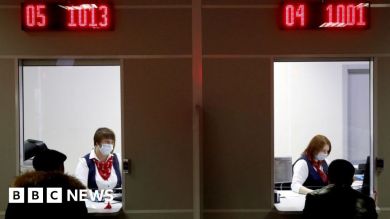 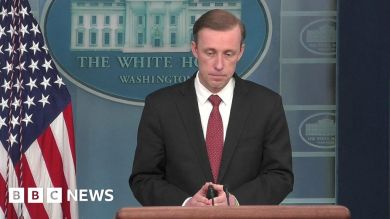