Senior House Republicans are moving swiftly to build a case against Homeland Security Secretary Alejandro Mayorkas as they strongly weigh launching rare impeachment proceedings against a Cabinet secretary, a plan that could generate sharp backlash from GOP moderates.

Key committee chairmen are already preparing to hold hearings on the problems at the southern border, which Republicans say could serve as a prelude to an impeachment inquiry against Mayorkas. Three House committees – Oversight, Homeland Security and Judiciary – will soon hold hearings about the influx of migrants and security concerns at the border.

The House Judiciary Committee, which would have jurisdiction over an impeachment resolution, is prepared to move ahead with formal proceedings if there appears to be a consensus within the GOP conference, according to a GOP source directly familiar with the matter. The first impeachment resolution introduced by House Republicans already has picked up support, including from a member of the GOP leadership team.

A GOP source said the first Judiciary Committee hearing on the border could come later this month or early February.

One top chairman is already sounding supportive of the move, a sign of how the idea of impeaching President Joe Biden’s Cabinet secretary has moved from the fringes to the mainstream of the conference.

“If anybody is a prime candidate for impeachment in this town, it’s Mayorkas,” Rep. James Comer, chairman of the House Oversight Committee, told CNN.

It’s exceedingly rare for a Cabinet secretary to be impeached, something that has only happened once in US history – when William Belknap, the secretary of war, was impeached by the House before being acquitted by the Senate in 1876. Yet it’s a very real possibility now after Kevin McCarthy – as he was pushing for the votes to win the speakership – called on Mayorkas to resign or face potential impeachment proceedings.

With no signs that Mayorkas is stepping aside, House Republicans are signaling they’re prepared to move ahead, even as a bevy of members are uneasy about the approach.

Indeed, McCarthy has to balance his base’s demands for aggressive action with the concerns from more moderate members – many of whom hold seats in swing districts central to his narrow majority. And some in safer seats aren’t yet sold on whether the GOP should pursue that route.

“Clearly, the management of the Southern border has been incompetent,” Rep. Dusty Johnson, a Republican of South Dakota, told CNN. “That is not the threshold in the Constitution for impeachment – it’s high crimes and misdemeanors. … I would want to think about the legal standard the Constitution has set out – and whether or not that’s been met.”

If he loses more than four GOP votes on an impeachment resolution, the effort would fail in the House and could mark a huge embarrassment for the GOP leadership. Already, he has lost one vote – Rep. Tony Gonzales of Texas who said he’d oppose the effort – and several other members are far from convinced that charging Mayorkas with committing a high crime and misdemeanor is warranted, even if they believe he’s done a lackluster job in helping secure the southern border.

“Has he been totally dishonest to people? Yes. Has he failed in his job miserably? Yes,” Rep. Mario Diaz-Balart, a Florida Republican, said of Mayorkas. “Are those grounds for impeachment? I don’t know.”

Indeed, Republicans from swing districts are urging their colleagues to not rush into impeachment, which would be dead-on-arrival in the Senate and could turn the American people off if the party is perceived as overreaching.

“The border is a disaster and a total failure by the Biden administration. We should first to try to force change through our power of the purse,” Rep. Don Bacon, who represents a Biden-won district in Nebraska, told CNN. “Maybe after more oversight we’ll see where middle America is at, but I don’t think independent, swing voters are interested in impeachments.”

Asked Tuesday about his pre-election warning that Mayorkas could be impeached by the House over the GOP concerns about the borders, McCarthy railed on the problems at the border.

“Should that person stay in their job? Well, I raised the issue they shouldn’t. The thing that we can do is we can investigate, and then that investigation could lead to an impeachment inquiry,” McCarthy told CNN, adding it could “rise to that occasion” of an impeachment if Mayorkas is found to be “derelict” in his duties.

During the first working week of their new majority, Rep. Pete Fallon, a Texas Republican, introduced articles of impeachment for Mayorkas over problems at the southern border, and Rep. Andy Biggs, a hard-right Arizona Republican, vowed to re-introduce a similar resolution in the coming weeks, which could serve as a template for eventual impeachment proceedings.

Fallon’s resolution says Mayorkas has “undermined the operational control of our southern border and encouraged illegal immigration,” also contending he lied to Congress that the border was secure.

Democrats say Republicans are threatening to impeach Mayorkas for pure political reasons, and say policy disputes hardly rise to the level of “high crimes and misdemeanors.”

Mayorkas has already testified in front of Congress numerous times since he assumed his post, and his agency says he is fully prepared to continue complying with oversight in the GOP-led House. So far, there have been no formal requests for hearings or testimony, with congressional committees still working to get off the ground, though Republicans last year sent numerous letters and preservation requests telegraphing their plans for the majority.

In a statement, a spokeswoman for Mayorkas made clear he has no plans to resign and called on Congress to come together to fix the nation’s immigration system.

“Secretary Mayorkas is proud to advance the noble mission of this Department, support its extraordinary workforce, and serve the American people. The Department will continue our work to enforce our laws and secure our border, while building a safe, orderly, and humane immigration system,” the spokeswoman said in a statement. “Members of Congress can do better than point the finger at someone else; they should come to the table and work on solutions for our broken system and outdated laws, which they have not updated in over 40 years.”

Yet there are signs that the push is gaining steam in the House GOP.

Fallon’s resolution has attracted the support of several Republicans who previously held off on calling for impeachment, including Rep. Dan Crenshaw, a Texas Republican and member of the Homeland Security Committee, and Oklahoma Rep. Stephanie Bice, a new member of the GOP leadership team – signaling the idea is hardly isolated to the fringe wing of the party.

Fallon, too, had not previously backed impeaching Mayorkas until this Congress. Fallon said that he introduced impeachment articles to help get “the ball rolling,” but still believes it’s key to show the American public why they believe Mayorkas deserves to be removed from his post.

“It is important, it is an emergency, you need to break the glass, you really do need to take it up, and then we’re going to have an additional investigation,” Fallon told CNN. “While that’s why I filed the articles, you can always just sit on them and not do anything with them. That starts the ball rolling, we’re going to give Mayorkas the opportunity to defend himself and his department.”

Meanwhile, key committee chairs are vowing to hold hearings on the crisis at the southern border and prepping plans to haul in officials for interviews. GOP Rep. Jim Jordan of Ohio, who leads the powerful House Judiciary Committee where impeachment articles would originate, suggested the issue would be one of the first hearings when his panel gets up and running.

GOP leaders are cognizant of the fact they can only afford to lose four Republicans on any given vote, and want to build a thorough case for impeachment that can bring the entire party along. But pressure is already building on McCarthy, who has emboldened members of his right flank in his bid to claim the speaker’s gavel – and even given them a powerful tool to call for his ouster if he doesn’t listen to their demands.

Rep. Chip Roy, a Texas Republican and one of the key negotiators in the standoff over McCarthy’s speakership and who was the first to call for Mayorkas’ impeachment, told CNN: “I’ve been very public about my belief that he has violated his oath, that he has undermined our ability to defend our country.”

The primary committees that would be involved in building a case against Mayorkas are both chaired by members of the hardline House Freedom Caucus: Jordan and Tennessee Rep. Mark Green, the newly elected leader of the House Homeland Security Committee.

Part of Green’s pitch to become chairman has centered on how he will hold the Biden administration accountable over the southern border. Green told CNN he has a “five-phase plan” to delve into the issue.

“And if it turns out that (impeachment) is necessary, we’ll hand that over to Judiciary,” Green said. “We’ll have a fact-finding role.”

There’s also been talk of holding field hearings at the southern border, while Republicans plan to keep making visits there, as they did in the last Congress.

Jordan told reporters that the border problems will likely be one of his first hearings as chairman of the Judiciary Committee. But a source close to Jordan, who has become a close McCarthy ally, cautioned that they will not move ahead with impeachment unless the party is fully on board

And it’s clear that House Republicans are not yet in agreement on the issue.

Freshman Rep. Mike Lawler, who represents a Biden-won district in New York, told CNN shortly before being sworn in: “I think the top priority is to deal with inflation and the cost of living. … I don’t want to see what we saw during the Trump administration, where Democrats just went after the President and the administration incessantly.”

But there are some Republicans in Biden districts already lining up behind impeachment articles for Mayorkas, suggesting the politics could be moving in the GOP’s direction.

Freshman Rep. Nick Langworthy, another New York Republican, is among the 26 co-sponsors who have signed on to Fallon’s impeachment articles so far.

And another freshman New York Republican from a swing district, Rep. Anthony D’Esposito, has also expressed support for impeaching Mayorkas.

D’Esposito contended that many Customs and Border Protection agents are tired of the leadership from the top.

“They are the ones that will tell you flat out that Secretary Mayorkas is not living (up) to his oath and he is failing to secure our homeland,” he added.

And South Carolina Rep. Nancy Mace, also a Republican who hails from a swing district, said Mayorkas needs to go.

“When you raise your hand and take an oath to protect our country’s border, and you intentionally and willfully neglect to do that job, you should lose it,” said Mace, who pointed to the influx of drugs across the southern border. “Either way, Secretary Mayorkas has to go.”

House Republicans who have long been itching to impeach Mayorkas have been trying to keep the pressure on their leadership, holding a news conference last month and urging McCarthy to more explicitly spell out where he stands on the issue before they voted him speaker.

McCarthy traveled to the southern border shortly after the November election, where he called on Mayorkas to resign and threatened him with a potential impeachment inquiry, though he has not explicitly promised he would go that route.

But even if an impeachment resolution is approved in the House, winning a two-thirds majority in the Senate to convict Mayorkas has virtually no chance of succeeding. Some Senate Republicans, such as Senate GOP Whip John Thune of South Dakota, were noncommittal about backing such a move. And Democrats are roundly dismissing the idea.

Coons quickly added: “I think that’d be an enormous waste of time.”

This story has been updated with additional developments Tuesday. 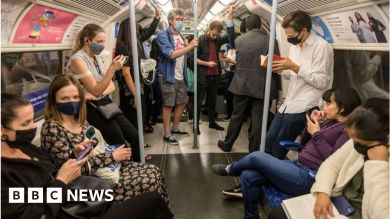 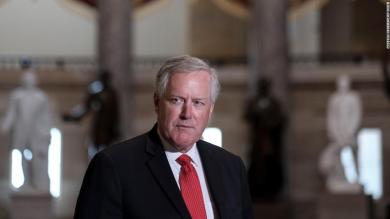 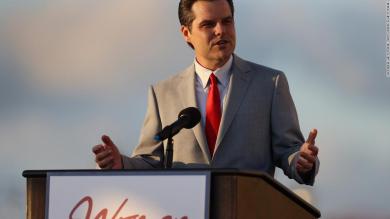