But in order to lure him to Los Angeles for a summit of regional leaders that was plagued by boycotts, Biden agreed to a one-on-one meeting.

Biden’s meeting with Bolsonaro demonstrated the lengths he was willing to go to in order to offer a unified picture of the Western Hemisphere at a conference where disunity was often on display. And its coincidental timing alongside the House hearing on the events of January 6, 2021 — where the autocratic tendencies of the previous US President were exposed in sometimes-shocking fashion — laid bare the difficulty in using America’s example to promote democracy in an increasingly fractured region.

Biden was able to secure some important commitments this week, including an agreement on migration that came together at the last minute. But questions over attendance and the region’s disparate priorities were still on ample display. And Biden’s political struggles were never far from the surface.

Here are three takeaways from this week’s Summit of the Americas.

Trump lingered over this week’s summit in Southern California like the June gloom, from his Brazilian protégé to the hearing exposing his disinformation scheme to the persistent questions about American commitment in a region he mostly ignored.

Biden actively and explicitly worked to convince his counterparts that he was adopting his own, different approach.

“I think that there’s a means by which we can maybe undo some of the damage done the previous four years, when it wasn’t very much taken seriously — the relationships,” he said while meeting with leaders from the Caribbean.

A little while later, he said during the summit’s opening plenary session that he wanted to discuss “proposals that I think are a far cry from what we saw from our previous American administration.”

This week’s summit amounted to the type of presidential work Trump found little use for during his time in office. He skipped the Summit of the Americas when he was in office and complained to his aides about attending the G7 and G20 meetings, questioning their point.

Even President Barack Obama sometimes dreaded the kind of massive summit where he was left to sit for hours listening to endless speeches by other world leaders. He was often seen chomping away on nicotine gum as he took his seat.

There was little question that Biden would reverse that trend. He said this week that he had often reminded Obama that “all politics is personal” — and that actually accomplishing anything required showing up in person.

“It makes a difference when you get to know someone,” he said at the start of a dinner he hosted in the Getty Villa’s Mediterranean gardens, near Malibu. “Whether you agree or not, it makes a difference to look in their eyes and understand a little bit more what’s in their heart.”

Biden was in fact so absorbed in meeting his fellow leaders that he missed Thursday night’s January 6 hearing in its entirety, despite telling the Canadian Prime Minister earlier in the day that the event would “occupy my country.”

“Didn’t have time,” Biden said with a shrug when CNN asked whether he’d caught any of the coverage.

Biden arrived in Los Angeles hoping to use new economic and migration announcements to demonstrate cohesion in a region of fractured politics and, at times, entrenched skepticism of the United States.

And by the time the summit was over, 20 leaders had signed on to an agreement that offers a road map for handling the region’s large migration flows, perhaps the most significant accomplishment of a gathering whose relevance many had questioned ahead of time.

Yet the decision of several leaders to boycott the summit, including the top officials from Mexico and three Central American countries the US has worked hard to cultivate, remained a visible sticking point. They refused to attend because Biden declined to extend invitations to the autocratic leaders of Cuba, Venezuela and Nicaragua.
Heading into the summit, White House officials were frustrated that the drama over the participants appeared to be obscuring the important issues at stake. Yet when it came time for the leaders to gather inside the Los Angeles Convention Center, the discord was plain.

And on Friday evening, first lady Jill Biden complained that the news coverage of her husband had been “so unfair.”

“Every leader came up to Joe and said what a difference you’ve made and say how we can work together,” she told Democratic donors in a backyard in Brentwood.

As Biden and Vice President Kamala Harris watched from mere feet away, Belize’s Prime Minister called it “inexcusable” that all the countries of the Americas had not been invited. He said the power of the summit was “diminished” by their absence.

Argentine President Alberto Fernández said during a speech later in the program that the rules of future summits should be changed to prevent nations from being excluded. “We definitely would have wished for a different Summit of the Americas. The silence of those who were absent is calling to us,” he added.

The remarks did not come as a surprise to US officials, who were aware of the disagreements beforehand and anticipated that some leaders would air them publicly. Before the summit, some Biden aides suggested there would be a certain amount of political posturing among leaders who have domestic audiences that are often skeptical of the United States.

And as he left the stage, Fernández and Biden shared a friendly handshake, a sign that behind the scenes things were not as tense as they appeared.

“Notwithstanding the disagreements, think back to what we heard today,” Biden said after sitting through his counterparts’ speeches. “We heard almost total agreement on the substantive things that we should be doing.”

In the land of $7-per-gallon gasoline, Biden was never far from his biggest political liability. And while foreign policy can sometimes act as an escape hatch for politically imperiled presidents, a weakened US leader is not helped by boycotts and public shaming from his global counterparts.

Many of the problems Biden hoped to address at his summit are potent political problems as well, including large flows of migrants on the southern border and inflation made worse by unreliable supply chains.

During a pause from his summit hosting duties, Biden made a detour to the Port of Los Angeles to address what his team views as the most pressing current issue: high prices for everything from gas to groceries.

He assigned blame for rising costs to Russia, oil companies, shipping conglomerates and Republicans, insisting he is doing what he can to tame inflation as new numbers showed prices accelerating last month.

To coincide with his trip West, Biden’s aides booked an appearance on Jimmy Kimmel’s late-night talk show, often viewed as an opportunity to show off a politician’s lighter side.

Yet Biden’s appearance was a mostly serious interview on gun control and abortion rights, two other intractable issues on which the President has few options to act alone, even as his most ardent supporters demand he do so.

“I don’t want to emulate Trump’s abuse of the Constitution, constitutional authority,” Biden told Kimmel on Wednesday after the late-night host asked why he couldn’t issue an executive order like Trump, who “handed them out like candy.”

When Kimmel asked how you play Monopoly when one side “won’t pass go” or play by the rules, Biden said: “You got to send ’em to jail.” 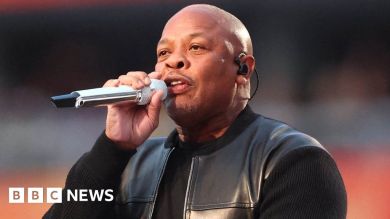 Super Bowl: Dr Dre and Eminem pack in the hits at half-time show 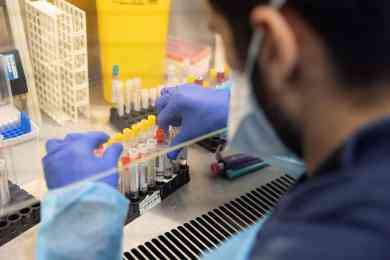 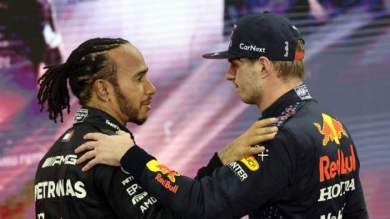 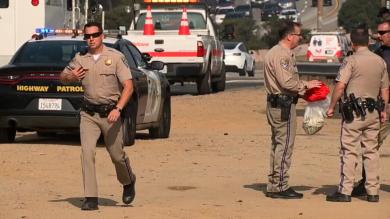